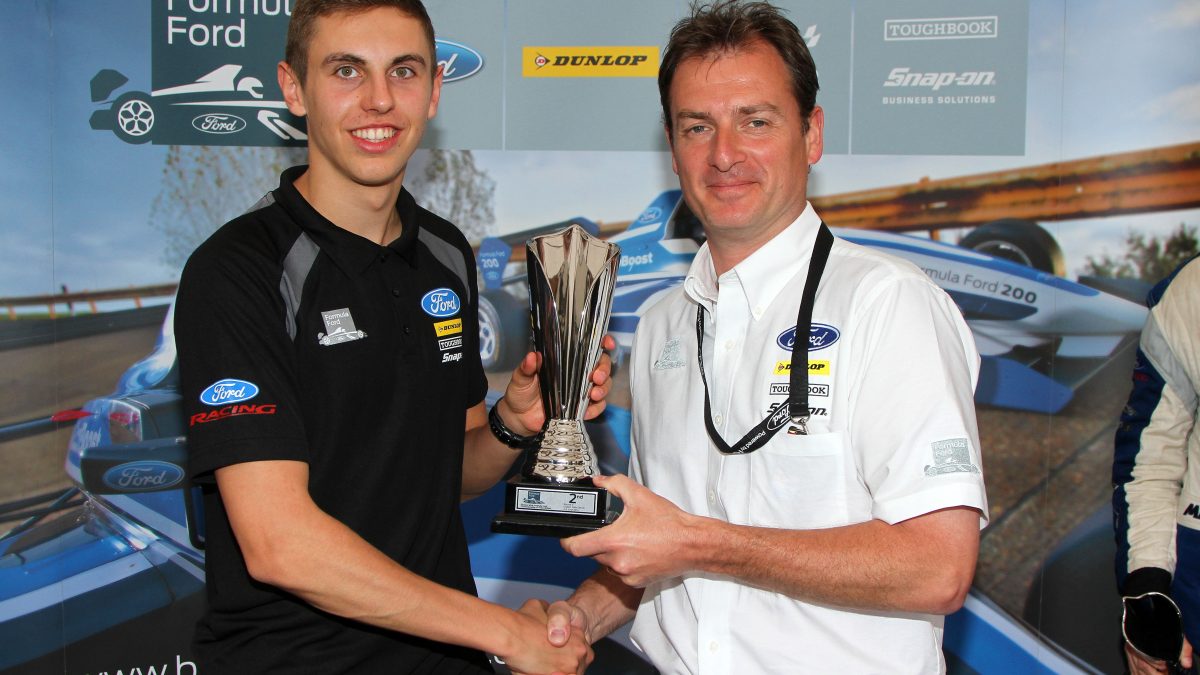 9 June, 2014 – The fourth round of the 2014 Dunlop MSA Formula Ford Championship of Great Britain at Oulton Park, Cheshire, was anything but short on drama. With the weather playing a key role at the two-day event, Harrison Scott’s Championship title contention was further cemented by a superb second race victory and two further podiums – one in each of the three rounds of the Championship this weekend.

In damp but drying track conditions during the 20-minute qualifying session on Saturday morning, Essex based Harrison was the only driver to nip under 108 seconds with a 1m 47.973s around the 2.7-mile International circuit to end the session 0.163s ahead of Championship rival Jayde Kruger (JTR).. With it he secured pole position for race one in the afternoon and his second best time afforded him P2 on the grid for the weekend finale on Sunday.
Heavy rain clouds threatened proceedings as 18-year-old Harrison made a commanding start to race one and maintained a dominant lead all the way to the chequered flag, 11 laps and 29.61 miles later. It was Harrison’s second wet race victory and seventh season podium with Falcon Motorsport, and put him in joint Championship lead with Kruger on 230 points.

Race two commenced late on Saturday afternoon with Harrison in P6 in the new reverse-grid format. The track was initially dry, but the red flags came out on lap six when rain caught out three of the slick tyred runners ahead of Harrison – Max Marshall, Sam Brabham, and Juan Rosso – all of whom left the track in individual incidents. With the 6:30pm curfew drawing ever nearer and three cars off-track simultaneously, the race came to an abrupt end with Harrison claiming the second placed trophy honours behind pole-sitter Kruger.

A sunny Sunday morning brought the crowds to Oulton Park, and the Falcon Motorsport drivers were up early for the series’ regular Drivers’ Autograph Session in the Formula Ford Paddock. The initial dry weather held for the weekend’s Formula Ford finale late in the afternoon when Harrison started from the front row of the grid in P2. He drove a superb race, once again showing his ever improving race craft, but was unable muster enough from his Falcon Mygale to match Kruger’s pace, even during a safety car interlude which was caused by a spin for SWB Sinter driver Greg Holloway.

Harrison maintained his podium finish consistency by taking the chequered flag in a further second placed finish, bolstering his points haul to 284, only nine points from the top of the 2014 Championship leader board.

n Scott, #6 Falcon Motorsport:
“I got a reasonable start to race three, but couldn’t quite get around Jayde in to the first corner. From there he was a bit quicker and was pulling away with every lap. The safety car came out and bunched us all up together and I knew that if I was going to get past him this would be my chance. I got right behind him going in to the last corner at the re-start, but he was just too quick and got away. But I am very happy with the weekend overall as it’s the first time this year we’ve got a podium in all three races. If we can find our straight line pace, enough for me to push, we’ll be challenging for the wins again soon. But I know that the team is working extremely hard and I would like to take this opportunity to thank Nick and everyone at Falcon Motorsport, especially my mechanic Oli Richards, and also my manager Peter of VCM Motorsport, for making it all happen for me.”

The next rounds of the Dunlop MSA Formula Ford Championship take place at Croft Circuit, Yorkshire, 28th – 29th June 2014.
TV highlights from Thruxton shall be broadcast on ITV4 on 23rd June 2014.