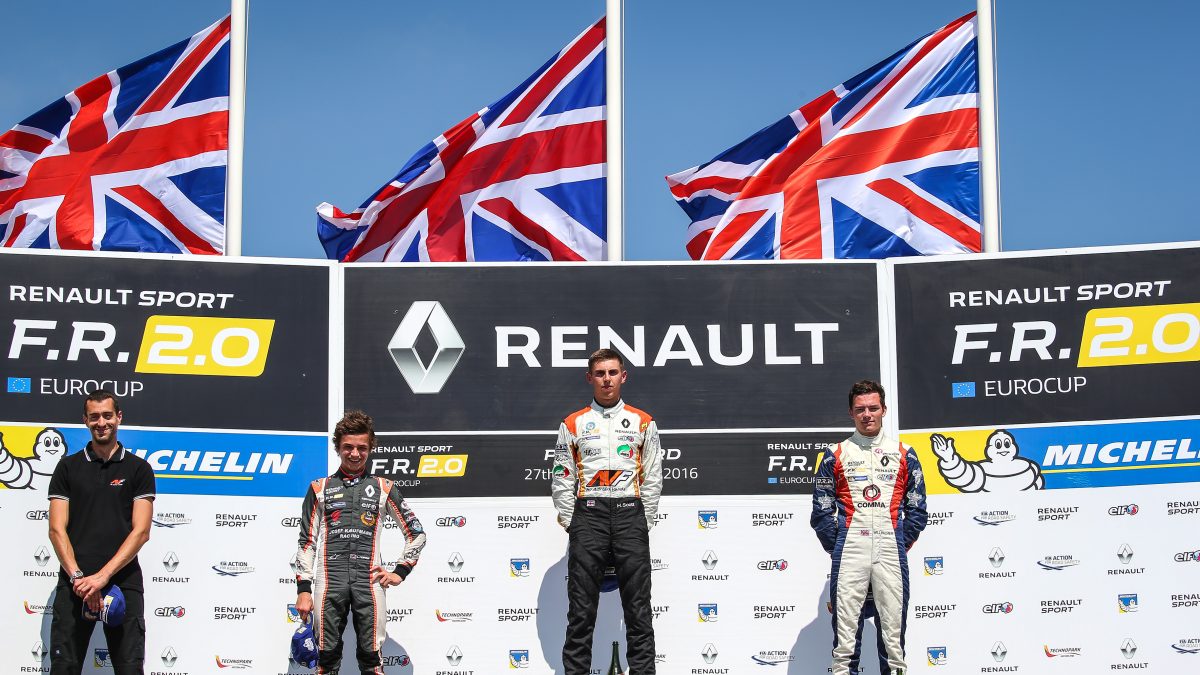 The 2016 Eurocup Formula Renault 2.0 Championship title fight is firmly on after Harrison Scott produced another stellar performance at Circuit Paul Ricard in France last weekend. The 20-year-old Briton scored his second pole position and third race victory with the AV Formula by Adrián Vallés team to sit firmly in third position on the Drivers’ Championship table and as one of only four drivers who can take the title crown with two rounds (four races) remaining. 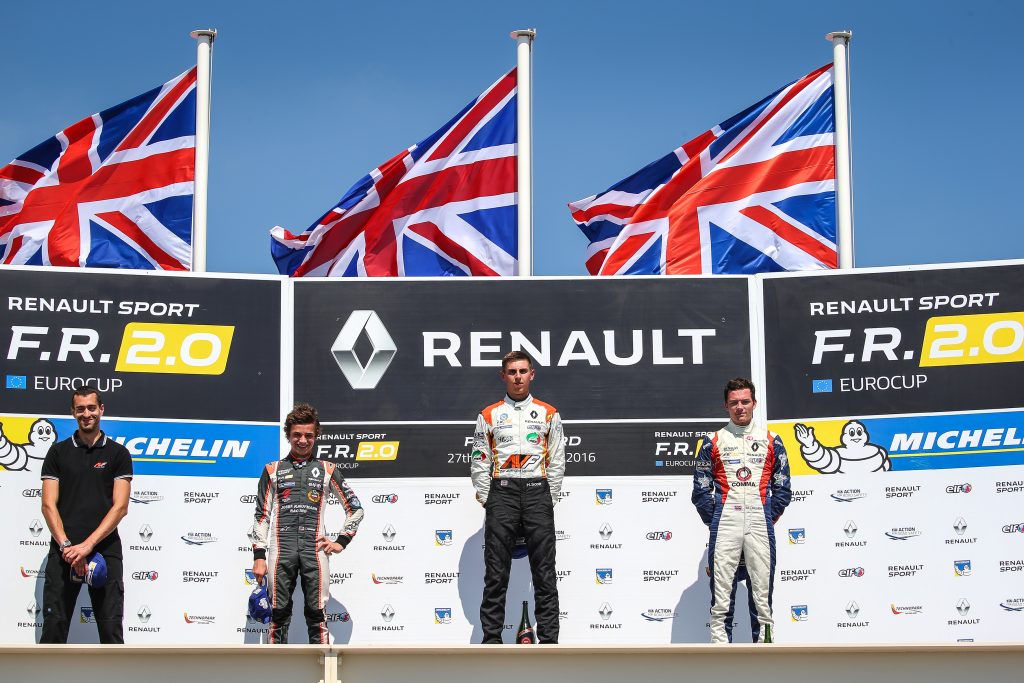 Buoyant from his wins in Monza and Austria, Scott, from Althorne in Essex, took to the track on Friday for two 50-minute sessions to re-acclimatise to the technical Circuit Paul Ricard for round five of the 15-race Eurocup FR 2.0 series. Whilst topping the time sheet in the closing minutes of session one, P1 was snatched away from Scott leaving him hungry to push his #22 AV Formula Renault even further. Only a few hundredths of a second split the front runners during the second session in the afternoon; whilst temperatures soared the lap times plummeted, and Scott concluded the day in P5.

Already a pole man before the summer break, Scott did it again on Saturday morning with a best time of 2:04.560 mins. The Englishman led from fellow Brits Will Palmer (R-ace GP) and Lando Norris (Josef Kaufmann Racing) to take his second pole position of the season.

While Palmer briefly took the lead at the start of race one in the afternoon, Scott and Norris both manoeuvred around him before the conclusion of the first lap. The duo then pulled away from their compatriot and Scott, extracting as much pace out of his AV Formula car as possible, displayed his even improving race craft by defending boldly against the Carlin of Norris. He took the victory at the chequered flag and moved in to second position in the Drivers’ Championship on Saturday evening.
Lack of clear track during second qualifying inhibited the AV Formula team from showing its true potential and pace on Sunday morning. Scott’s quick laps were interrupted by traffic which prevented all chances of fighting for pole position and slipped him down the time sheet to fifth fastest.
However, undeterred Scott made a great start to race two from the third row on the grid, taking Gabriel Aubry for P4 on lap one and fighting for what could have been a podium finish when he lost the rear whilst pushing for position on lap 10. A quick recovery ensured that Scott could make the most of the remaining three laps and he crossed the line in a points scoring ninth place at the chequered flag.

Harrison Scott, #22 AVF by Adrián Vallés team:
“We had a big high on Saturday, claiming pole position and going on to win the race with a great effort; the car was perfect and the result was fantastic for myself and for the team. On Sunday the car was really good again, but I just couldn’t piece it together as I got caught in traffic. That put me down to fifth, but with only half a tenth from P2, which I think would’ve been easily achievable if I’d have had a clear run. I got up to P4 in the opening lap of race two and I was pushing really hard to try to get a podium position when I lost the rear in the last sector on lap 10 and I spun. I managed to keep the car going and recover to take ninth place, but I am obviously disappointed as the Championship title fight is very close now and I need to be fighting for the win on every outing.”
Scott is currently third in the 2016 Eurocup Formula Renault 2.0 standings on 148 points with two rounds of the series remaining. But before round six at Spa-Francorchamps on 24-25 September, Scott has a busy racing schedule ahead of him including a guest drive with HHC in the BRDC British F3 Championship at Donington Park, an “intern programme” with Renault Sport at its Formula 1™ facility at Enstone, UK and a potential drive in the VCM Motorsport owned 1961 Cooper T56 at the Historics meeting at Spa following the pairing’s victory at the Silverstone Classic back in July 2016. 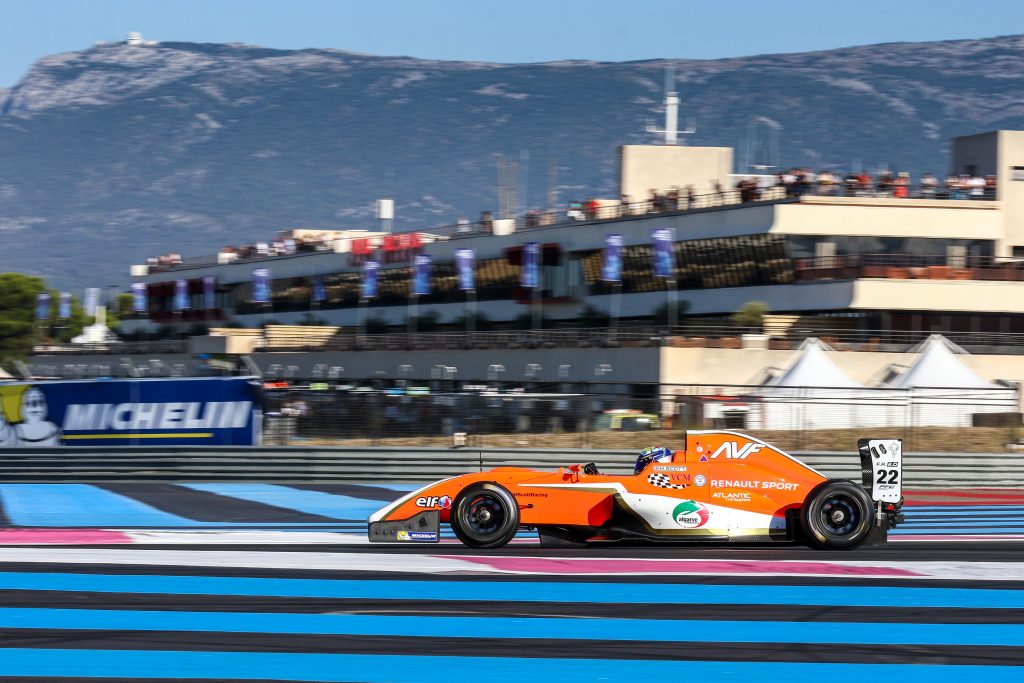