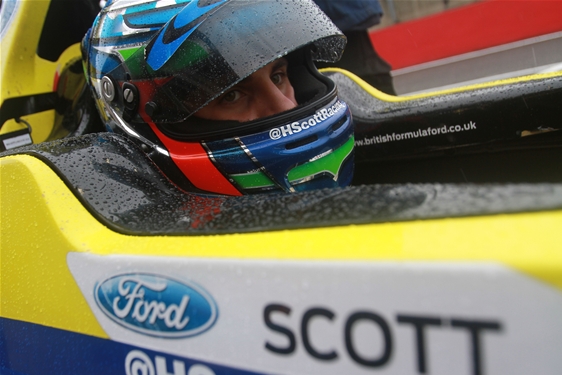 Reigning British Formula Ford Scholarship Class champion Harrison Scott will return to the series for an assault on the outright title in 2014 after renewing his allegiance with Falcon Motorsport.

But perhaps more impressive was his instant impression on the overall championship. In a season dominated by the experienced Dan Cammish, Essex-based Scott emerged as the series’ most exciting new prospect with 16 overall podiums, including a breakthrough victory at Silverstone. That allowed him to add an overall championship runner-up finish to his racing CV, an incredible feat in his debut year of single-seater competition.

Scott’s performances also earned him the coveted Mazda Road To Indy Formula Ford Driver of the Year award for 2013. The prize saw the teenager travel to Alabama in December where he sampled USF2000 and Pro Mazda machinery at IndyCar venue Barber Motorsports Park.

Now he has inked a deal to return to Oxfordshire-based Falcon Motorsport, and says that a second year in the highly competitive Formula Ford championship was a natural decision.

“We had a big sit-down over the winter to examine our options,” explained Scott. “I’m still only 17 and I want to learn my trade properly and get some good results, so we decided not to try to move up the ladder too quickly and that another season of Formula Ford was the best option. We are so happy with how the championship is run, the BTCC support status, the media and the TV time it gives drivers, so it was an easy choice.

“Racing in America was certainly an option, and remains so for the future, but right now I’m keen to give it my all in Europe and see what comes of that.

“Last year I gained an understanding of how to drive the EcoBoost Formula Ford at high speed, and the confidence to do so, and that will be a big help. Hopefully it will give me an edge over the new boys coming into the championship.”

And Scott makes it clear that his goal for the coming season is to draw upon his experience and clinch the British Formula Ford title outright.

“My aim will be to try to go one better than last year and to win the championship using everything that I have so far learned. I came on strong in the second half of the year, was challenging Dan, and if I can carry that on and win races then hopefully the championship title will follow.”

Scott will begin his assault on the British Formula Ford crown when the 2014 season begins at Brands Hatch on 29/30 March.