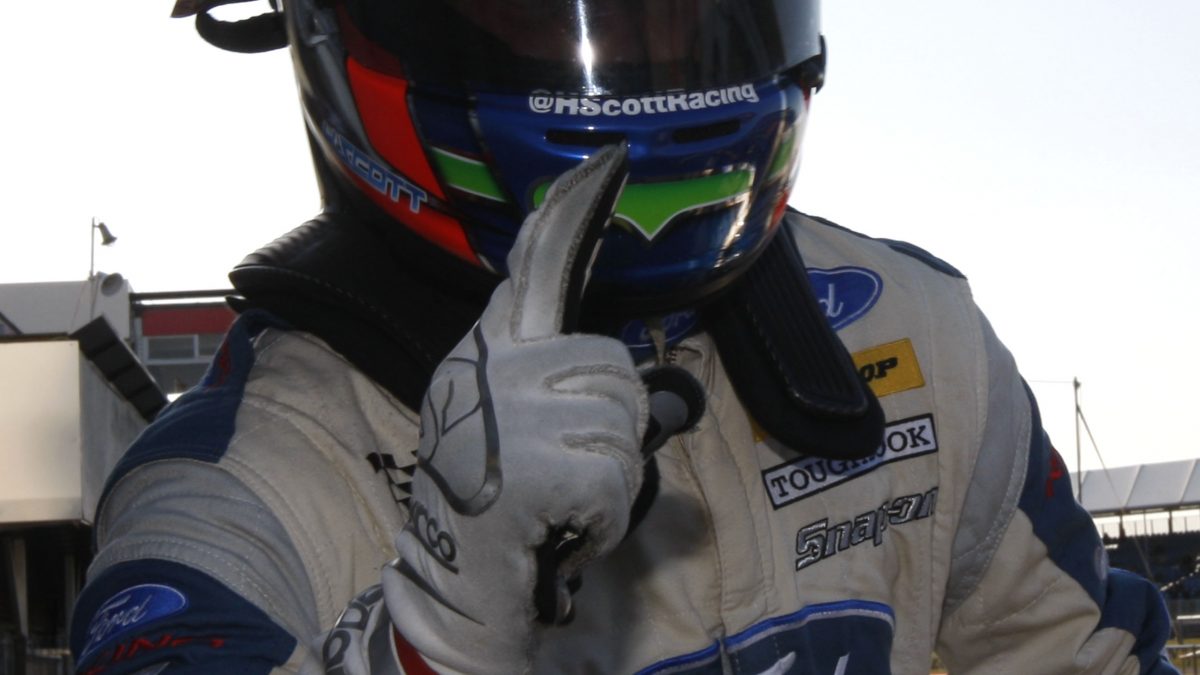 Scott, who only moved into car racing from karts at the beginning of this year, drove with a maturity beyond his years, to convert his fifth position grid slot into a memorable first single seater victory.

As the lights went out Scott made a good getaway and further round the first lap capitalised on an error from Jayde Kruger at Brooklands to nip into fourth position.

This soon became third when he benefitted from mechanical woes that befell pole sitter Max Marshall who had been running second.

Almost straight away Scott piled the pressure on Cameron Kaminsky for second and on lap five after running side by side for half a lap, he swept past at Becketts to claim the place.

With victory in his sights, Scott set off after long time race leader Sam Brabham and closed down a 2.5 second gap within six laps.

By lap 14 the gap was just two tenths of a second as Scott shadowed every move Brabham made. The relentless pressure finally paid off three laps later when Brabham made an error at Luffield which allowed Scott alongside. Brabham would not yield without a fight and the pair ran breathtakingly close alongside the main straight but with the advantage of the inside line into the extremely quick first corner, Copse, Scott made the move stick and grabbed the lead.

He then displayed impressive composure and control to ease away from Brabham and by the flag he had pulled 1.5 seconds clear.

He said: “I was over the moon as I crossed the line. It makes all the hard work worthwhile. The team improved the car a lot over the weekend and I felt like I could go with the JTR cars in front. I closed down quite a big gap to Sam Brabham and the car felt great, I was able to make a move and then I managed to pull away at the end.

On the winning maouevre, he said: “It was close! I tried it in race two on Sam and he managed to stay round the outside. So I went for it again, I think he locked up the rears and went a bit wide into the middle of the track, I just placed my car right up the inside, he tried going round the outside but I just managed to squeeze him wide and keep track position. From there it was just a case of not making mistakes.”

Earlier in the day a fourth place finish had been enough to secure Scott the incredibly prestigious scholarship class title. His performances in this class of the series in 2013 have been one of the main reasons why many people up and down the paddock are talking so highly of the young Essex racer.

On this fine achievement, Scott said: “I didn’t expect to be getting a title in my first year of car racing but to seal the scholarship class with four races to go, I’m so happy. My team, Falcon Motorsport have worked hard all year, thanks to them and it’s nice to get this result for them.”

The weekend had got off to a difficult start when in the opening race Scott was caught up in somebody else’s accident. Running in a secure fourth position, he was one of the first drivers to arrive at the scene of an incident between the front two. As he attempted to avoid the mayhem, he spun to the back of the field. From there he fought his way back up to eighth but was disappointed to lose good points through no fault of his own.

However, this proved to be but a mere hiccup in the grand scheme of things as he collected a well-deserved title and then inaugural victory in the following two races.

The final three rounds of the championship take place at Brands Hatch in a fortnight’s time where Scott will aim to complete what has been a wonderful first foray into car racing by securing the runner up spot in the overall points table.