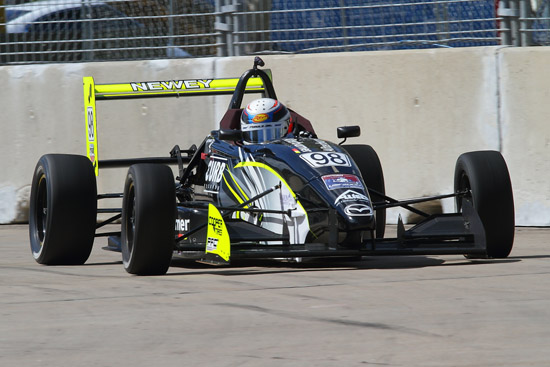 28 November, 2013 – Formula Ford Scholarship Class Champion Harrison Scott is all set to take the next step in his promising single-seater career with a two-day test in the United States as part of the Mazda Road To Indy programme. The Essex-based 17-year-old won the fully funded trip thanks to his stellar performances with the Falcon Motorsport team this season, his first in a racing car.

Next week Harrison will begin his journey to Alabama and the Barber Motorsports Park in Birmingham. He is due to drive a USF2000 single-seater with race-winning team Afterburner Autosport on 9 December and the following day will test a Pro Mazda car for the JDC MotorSports squad, whose cars have propelled three drivers to the championship title.

“It’s going to be a great experience to go and see what it’s like out there,” said Harrison. “I’m hoping that I will do well and that teams are going to notice me. It would be great to race in the USA and it’s certainly a possibility that we are looking at. If the test goes well, then who knows? I have no firm plans yet for next year; we are going to wait to see how the test goes before making any decisions.

“From what I have heard the USF2000 car is quite similar to the EcoBoost Formula Ford I raced this year and should not feel too different from what I am used to, while the Star Mazda chassis approaches an F3 car in terms of power and handling, so it should be good. I understand I will get a couple of hours of running in each, so hopefully I can prove my talent and impress.”

There is little doubting Harrison’s talent: he stepped out of karting and into the Dunlop MSA Formula Ford Championship of Great Britain and was immediately competitive in his Falcon-run EcoBoost Mygale. There were 13 class wins en route to the Scholarship title, 16 appearances on the overall podium as he sped to championship second, and he scored his debut outright race victory at Silverstone towards the end of the year.

Scott was selected from championship nominees by a panel of UK and US racing experts as not only the driver with the most promise but also the one who would gain the most from being named the Mazda Road To Indy Formula Ford Driver of the Year.

“Harrison was the stand-out performer among the junior drivers in Formula Ford this year,” said panellist Joe Williams of WH Sports Group, “and we are delighted to give him this opportunity to go and test over in the USA. We’re very hopeful that he will continue his career in the States, as a number of European drivers have done so successfully in recent years.”

Added Formula Ford championship manager Sam Roach: “Harrison impressed everyone this season and we have no doubt that he will do the same in Alabama. Mazda Road To Indy is a great initiative and one that we are delighted to be associated with.”

There is a long history of Formula Ford graduates carving successful careers for themselves in Stateside racing. Josef Newgarden followed up on his 2009 Formula Ford championship second with an Indy Lights championship win and a regular seat with a top IndyCar team, racing alongside Formula Ford alumni Mike Conway and Charlie Kimball.