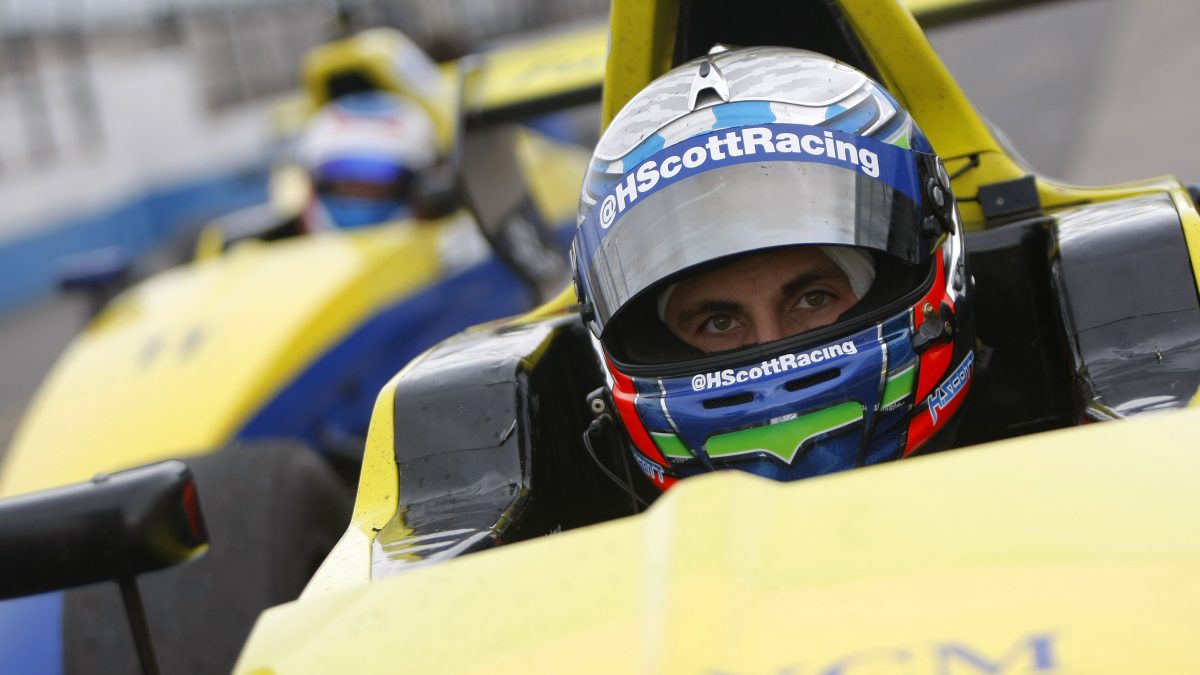 21 April, 2014 – It was an Easter holiday of mixed racing fortunes for Harrison Scott, the 18 year old racing driver from Essex, UK.

During the second race weekend of the 2014 Dunlop MSA

Formula Ford Championship of Great Britain at Donington Park, Harrison secured a pole position, his first sensational race win of the season, a further podium finish, but succumbed to a mechanical issue forcing him to retire from the weekend’s finale.

Only half a second covered the top seven drivers in testing at Donington Park on Thursday, ahead of the main racing event. Harrison ended the day on top of the timesheets for his Falcon Motorsport team in a repeat of the test result at Thruxton the week prior.

Harrison had to be content with sharing pole position honours in a closely fought qualifying session on Saturday morning at Donington Park. He set a fastest lap of 1:05.954 seconds, only 0.097 behind the leading time set by JTR’s Jayde Kruger, to ensure a second row start for race one and a pole position start for race three on Sunday, as his second-best lap time was the best of the field.

Harrison made a good start to race one from P3 on Saturday afternoon, but on the sixth lap the safety car came out following an incident at the chicane involving Juan Rosso and his team mate, Ricky Collard. After the restart three laps later, Harrison pushed the leading pair throughout the entire race, but was satisfied to have held third until the chequered flag and collect his third podium finish trophy in four races.

After a slow start from P4 (reverse grid), Harrison moved into third place on lap two as Kruger slipped behind both his car and James Abbott. Two laps later he was embroiled in a long fight with Max Marshall, but the result of which was a bold move by Harrison that took him up to P2. By the end of lap five Harrison was 4.0 seconds behind the race leader, but within a further lap he had halved the gap and was homing in on Juan Rosso’s rear wing. Unsurprisingly, he took the lead on lap eight with ease, overtaking Rosso during a commanding charge which also saw Harrison set the fastest lap of the race. He took his first win of 2014 by an impressive 4.5 seconds margin and as a result jumped to the top of the Championship leader board.

The final race of the Donington Park weekend later in the afternoon provided thrills and spills on the now dry National circuit. Harrison Scott started from pole, but Sam Brabham edged in front into turn one and snatched away the lead. Harrison defended boldly in front of third placed Kruger and, when Brabham went off at the Old Hairpin, Harrison took the lead of the race. However, after pulling away from Kruger and showing the pace of his Falcon Mygale once again, smoke from the back of his car on lap eight indicated that he was suffering a terminal oil issue and he had to stop out on track to retire.

Harrison Scott, #6 Falcon Motorsport:
“Our retirement from the last race is just one of those things; at least it happened while I was leading and after I had set fastest lap! But I am over the moon to finally get that win in race two. We also had quite a large lead margin in the end, which is very pleasing. We’ve been so close, at Brands and in the first race here yesterday, so I am very happy for the whole Falcon Motorsport team.”

The next rounds of the 2014 Dunlop MSA Formula Ford Championship of Great Britain take place on 3/4 May at Thruxton Circuit, Hampshire.