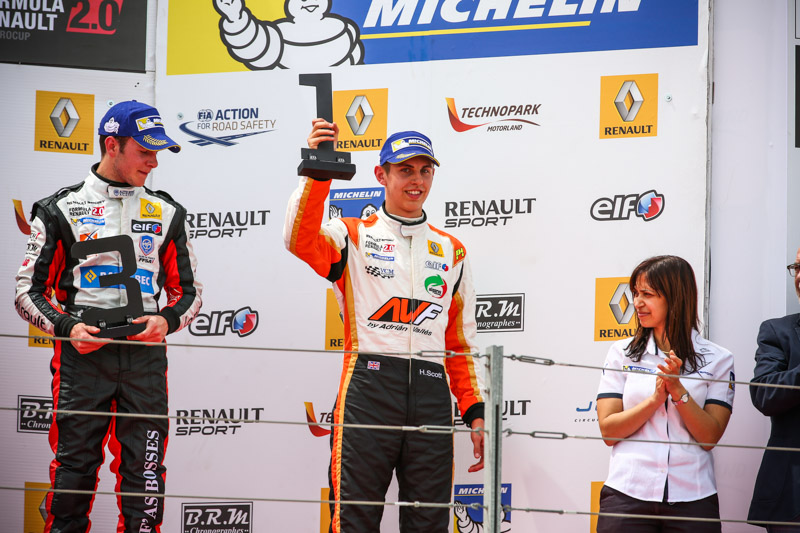 26, April, 2015: The 2015 Eurocup Formula Renault 2.0 season has started with an encouraging performance by Essex born Harrison Scott and his AV Formula team. Solid qualifying results, a first ‘Rookie’ Trophy in race one and a P8* points scoring finish in race three concluded a positive inaugural weekend for the BRDC ‘Rising Star’.

Season eleven of the World Series by Renault commenced at the Ciudad del Motor de Aragón (Motorland circuit) near Alcañiz, Spain this weekend. It was one of only three weekends to feature a trio of Eurocup races – the usual two-race format remains for four of the 2015 events to provide a calendar of seventeen, 25 minutes long contests.

19 year old Harrison took to the asphalt for the first of two practice sessions on Friday morning and spent his time acclimatising to the busy 30-car strong grid. He was able to extract competitive pace from his 210 brake horse power FR2.0/13 Tatuus charger to set the eighth and tenth fastest lap times consecutively.

Saturday morning brought cool, clear weather for the two Eurocup qualifying Group sessions for races one and two. Harrison was drawn in Group A and showed ever improving race craft by setting the fifth quickest time to sit in P10 for the start of race one. The grid for race two is decided by the competitors’ second fastest laps, and Harrison’s afforded him a P8 starting position for the second race of the day.

Race one commenced at lunchtime on the 5.344 km (3.321 mi) circuit with Harrison on the fifth row of the grid. He defended well against a much more experienced field during his inaugural Eurocup race and took the chequered flag in a respectable P12, also receiving the ‘Top Rookie’ accolade on the trophy podium.

From P12 at the start of race two later in the afternoon, Harrison was running up in eighth place when the safety car was deployed for an on track incident. When the race re-started, he got caught in traffic at the hairpin and ran wide when defending position. He brought his #27 AV Formula challenger home in a solid P11 and as first Rookie again to end the day with plenty of ‘positives’ and data to discuss with his team overnight.

Rain came to Spain for qualifying and race three on Sunday morning. Harrison did not risk running on slick (dry weather) tyres in the initially tricky conditions and ultimately lost time to others when the rain ceased and the track began to dry out. His time was good enough for another respectable P10 Group position, but as Group B followed on the faster, drying track, the 30 combined driver lap times resulted in a disappointing P20 starting grid position for Harrison for race three.

Heavy rain returned this afternoon and persisted for the entire 10-lap battle. Multiple on-track incidents meant that most of the race was conducted under the safety car and with increasingly poor visibility. Throughout the entire 25-minute (plus one lap) endurance Harrison kept his head and fought hard from the rear of the grid to ensure that he was able to take advantage of others mistakes. He finished in eighth position to collect his first four Eurocup Formula Renault 2.0 Championship points for his AV Formula team. 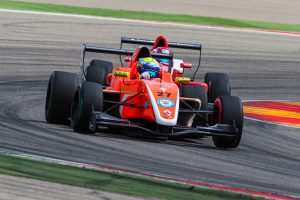 “It was a really positive first weekend. From the word ‘go’ we had good pace and this showed in first qualifying. I was able to set a time that put me amongst the more experienced drivers out there and although inexperience put me back during some of the battles in race one, the team did a great job to ensure I had a good set-up to make the most of my position. After learning a great deal yesterday, qualifying and race three today was a bit of a lottery due to the weather. I managed to overtake a few guys in probably the worst conditions I have ever raced in, so I’m very happy with the provisional P8 finish. I would like to thank my AV Formula team who worked really hard; we showed good progression and have a lot of positives to take away from this weekend in Spain.”