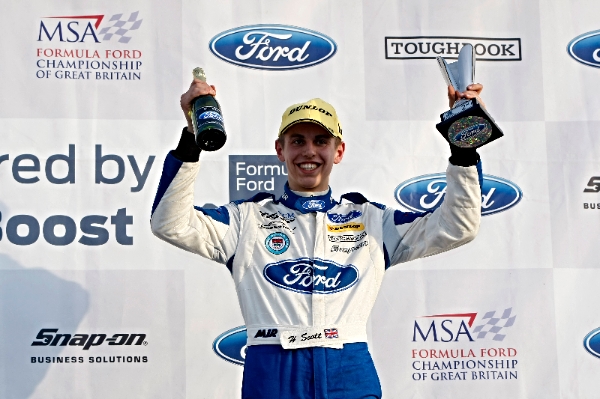 Eighteen-year-old Harrison, from Althorne, Essex, pipped last year’s season opener pole position time by 0.15 second to claim the top spot for races one and three. The fiercely contested qualifying session on Saturday morning saw the lap times across the 15-car field the closest yet in the new era of British Formula Ford – with only 0.25 second spanning the top five.

After a disappointing start to race one on Saturday afternoon, where he lost the lead to Jayde Kruger into Paddock Hill Bend, Harrison kept up the pressure and pursued his rival for 26 frantic laps of the Brands Indy circuit. Rarely more than half a second behind, Harrison chased the leader all the way to the chequered flag to secure P2 and his first podium of the year.

Race two later in the afternoon saw Harrison start on the third row of the championship’s new reverse-grid format (for the second race of each round) in P5. Sitting immediately behind team-mate Ricky Collard, Jack Barlow, Max Marshall and pole sitter Jack Abbott, it was going to be an extremely exciting and tightly fought race from start to finish.

Two laps in, Harrison was able to overtake both Jack and Max to move up, with Ricky ahead of him, in to P4. The leading pack then circulated nose to tail until the 13th lap when Harrison’s greater experience enabled him to seize second from Ricky through Clearways. With the clock ticking down to the final lap, the gap to race leader Abbott had become too great, and at the chequered flag Harrison had to settle for the runner-up trophy for the second time, but ended the day as championship leader after a successful day for his Falcon Motorsport team overall.

Sunday got off to a bright and sunny start with Harrison once again starting on pole for race three (following the second fastest qualifying times grid formation). He led confidently until an incident between Collard and Max Marshall brought out the safety car for three laps, at the end of which contact by second placed Kruger to Harrison’s rear forced him to run wide, on to the dirty part of the track. Losing three places at the re-start due to the resulting reduced grip meant that Harrison crossed the finish line in an ultimately disappointing points-scoring P4, but only two points from the top of the Championship leader board at the end of round one.

Harrison Scott, BRDC Rising Star:
“I had the perfect start to the season in qualifying on Saturday. I got a bit too much wheelspin off the line in race one however, and Jayde jumped me. I was able to close in on him at times, but he drove a clever race and stopped me from getting a run on him. I had a good result from race two as well; from fifth up to second on a track where it is really hard to overtake felt really good, and even though it was the same story again and I didn’t clinch the win, I got really close to the leader – I just didn’t have that little bit more in hand to pass him.

“Today was a little disappointing. I had a good start off the line for race three and the car was feeling great. We were picking up pace and pulling away until the safety car came out. I then had contact by Kruger from behind whilst on the last yellow lap, and this sent me wide for the re-start. It cost me several positions, which I tried to regain for the rest of the race, but I ended in P4. It’s one of those things and I’ll learn from this experience, but overall it’s been a great weekend at Brands Hatch and the Falcon team has been brilliant. I’ll now focus on the next round and retaking the lead of the championship in a few weeks at Donington.”

The next rounds will take place on 19/20 April,  Donington Park.