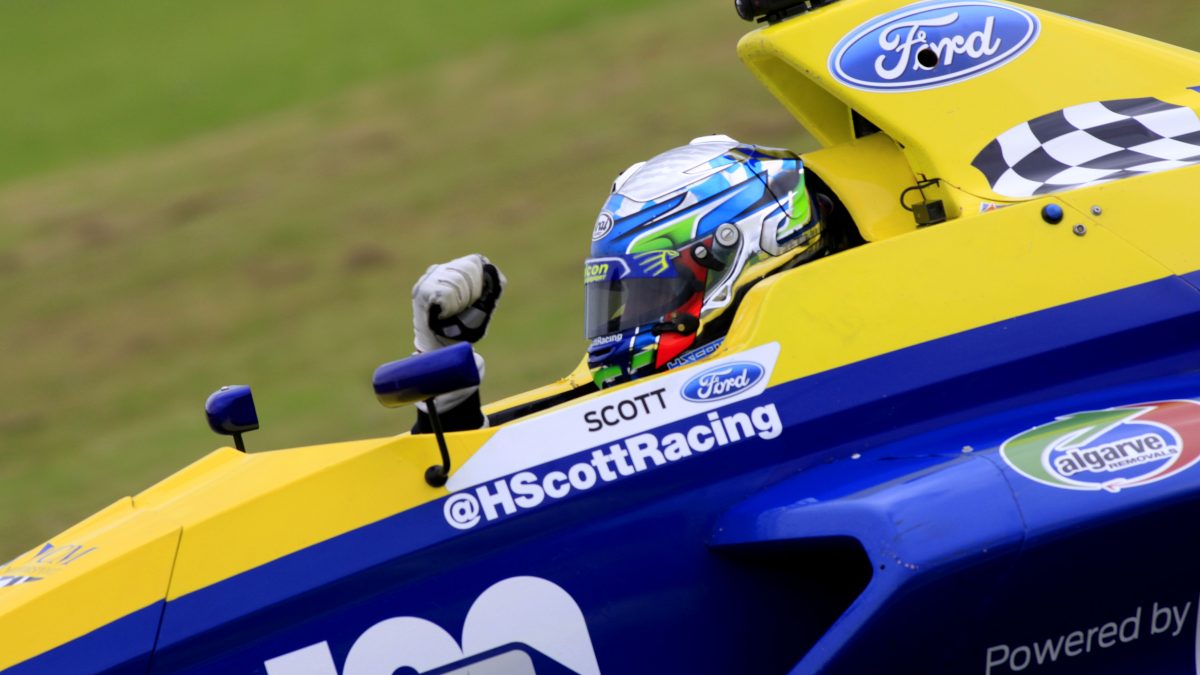 Harrison Scott has jumped to top spot on the 2014 Dunlop MSA British Formula Ford of Great Britain Drivers’ Championship table after a successful weekend at Croft. Essex-based Harrison continued to push his nearest rival at the North Yorkshire circuit last weekend to secure his Falcon Motorsport team’s third overall win in a hat-trick of podium finishes. 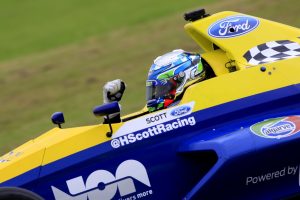 Harrison commenced the fifth Formula Ford event with a solid test outing on Friday. During the qualifying session on Saturday morning the majority of the field chose to run on wet tyres. 2013 Croft lap record holder Harrison set out on slicks, with only minutes remaining on the clock, to take advantage of the drying track. The decision paid off and Harrison set a blistering time of 1m 20.863s to clinch double pole in his #6 EcoBoost Mygale challenger for Rounds 13 and 15, for the second successive year.

Harrison led the first race on Saturday afternoon from pole position to the chequered flag. At the end of lap six his advantage over second placed Ashley Sutton was starting to diminish when a three-car collision at slippery Tower necessitated the arrival of the safety car. The positions at the end of the lap 10 were held under caution to the end of the race four laps later, with Harrison taking Falcon’s third win of the season in commanding style.

In the reverse-grid format for race two on Saturday afternoon Harrison lined up on the second row of the grid in P4. “The start I got was really, really good. I was able to go right round the outside at the first turn and got into 2nd. The first few laps I was trying to catch the leader, James Abbott, but I couldn’t quite find the speed to get to him. I then had Ashley Sutton right behind me for half the race, so I was trying to defend him off like crazy! It was looking comfortable, then he managed to get up the inside of me on the last corner, shot right across, but at that point he was too quick and he just went away from me. I knew that I wasn’t going to catch the front two and that there was a big gap behind me, so I was happy to come home with third and once again finish in front of our main rival Jayde.”

Harrison collected another third placed podium trophy to add to his mounting collection and ended the first race day six points ahead in the championship title fight.

The ITV4 live broadcast finale on Sunday afternoon brought a host of action and excitement. The start saw second placed James Abbott jump pole sitter Harrison on the run down to Clervaux. He tried to put pressure on the new race leader, but had to defend position first from Juan Rosso and then Ashley Sutton on lap 11. “Ashley’s pass was a bit of surprise to me because my mirror was broken and pointing down at the track,” said Harrison, “so I had no idea he was coming until he was alongside me. We touched, but fortunately there was no damage.”

Harrison came home in third place to complete a hat-trick of podium finishes at Croft. He concluded the weekend with a nine-point championship lead over his closest rival, Jayde Kruger.

Harrison Scott, #6 Falcon Motorsport:
“The weekend started well. From the two practice sessions on Friday we knew that we would be up there in qualifying. Our strategy was really good and were really happy to secure double pole by such a big margin. The races also played out went well and it was good to finish ahead of Jayde in all three rounds. Coming away from Croft leading the Championship feels fantastic, and it has made me even more determined to build on what we have achieved so far and to maintain our position for the second half of the season.”

The next rounds of the Dunlop MSA Formula Ford Championship take place on 2/3 August at Snetterton Circuit, Norfolk.