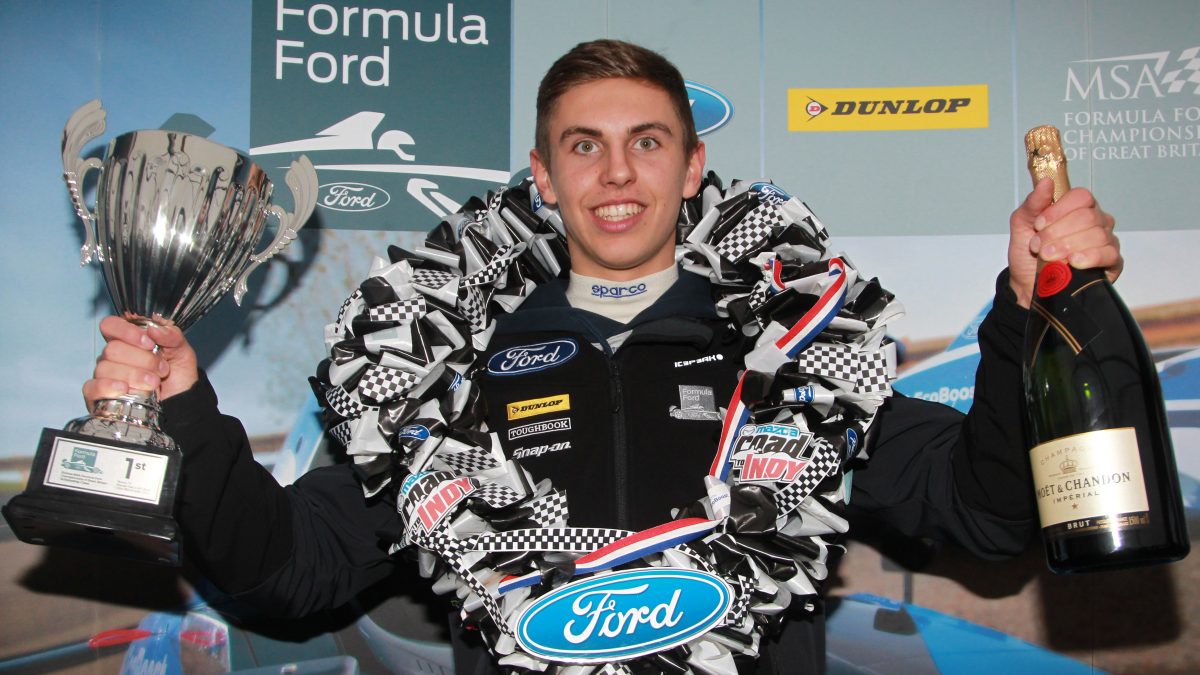 winner of the day, with the 17-year-old Essex racer confirmed as the Mazda Road To Indy Formula Ford Driver of the Year.

The news was revealed to a stunned Harrison live on ITV4 by Louise Goodman, immediately after the 30th round of the championship at Brands Hatch this afternoon. He was selected from the championship nominees by a panel of UK and US racing experts as not only the driver with the most promise but also the one who would gain the most from the scholarship award, which will see him travel to Alabama in December to take a free full-day test in a USF2000 single-seater, as well as a further full day’s testing in a Pro Mazda car.

“It’s brilliant news,” said the Althorne-based Falcon Motorsport driver. “I can’t wait. It will be a great experience to take a two-day test in the States; I hope that I can do the championship proud. There will be teams out there looking for drivers, and I’m hoping to make a good impression.”

Championship manager Sam Roach said of Harrison’s selection for the Road To Indy prize: “To go from karts to cars is a big step, and Harrison has impressed everybody with his very positive approach to the transition. We think he’s going to go far with that attitude.”

Scott, whose debut season in car racing this was, has enjoyed a remarkably successful year. He won the Scholarship Class for rookie racers and with it free entry to the 2014 championship; he was also second overall in the championship behind the unstoppable Dan Cammish, and will join Dan for an end-of-season test session in one of the Airwaves Racing team’s Ford Focus BTCC cars. Harrison was one of only two drivers this season to out-qualify Cammish, and he claimed his maiden car-racing victory at Silverstone late last month.

“The USA test and the touring car test will be two great experiences for me,” added Harrison. “I’m really pleased for the whole team because we have all worked hard this year. To win the Scholarship and second overall in the championship makes me really happy.”

Another award to go Scott’s way today was the Joe Tandy Memorial Trophy, awarded to the best rookie of the season by the JTR team and Joe’s parents.

“I am lost for words, this trophy is so special, I did not know Joe but I hear only great things about him, my sincere thanks must go to the Tandy family and the JTR team”