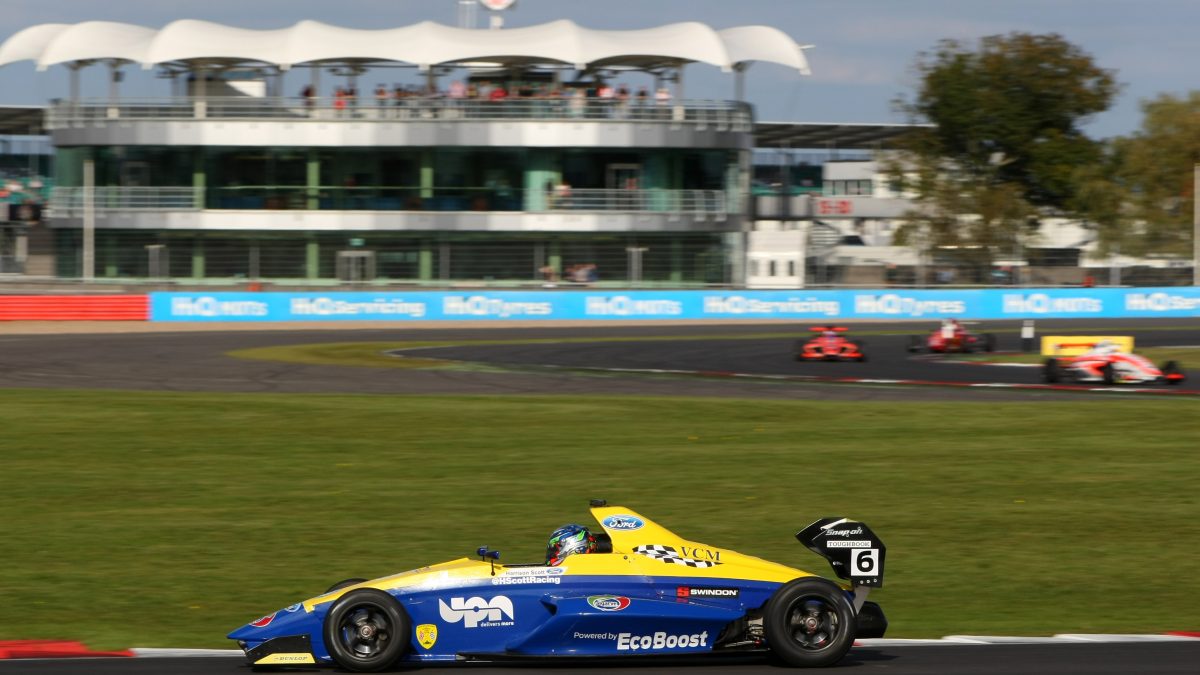 30th September 2014: Falcon Motorsport driver Harrison Scott comes away from rounds 25, 26 and 27 of the 2014 Dunlop MSA Formula Ford Championship of Great Britain tied on points at the top of the leader board following two second place podium finishes at Silverstone last weekend.

During regular Formula Ford event testing on the 1.6-mile Silverstone National circuit on Friday, 18 year old Harrison ended the day P2 in his much improved #6 Falcon Motorsport EcoBoost Mygale car and only missed out on pole during Saturday morning’s qualifying by a mere by 0.055 seconds.

Unfortunately for Harrison, Championship rival Jayde Kruger (JTR) clawed back vital points in his title hunt by winning race one (round 25) of the weekend on Saturday afternoon. But Harrison was never far from the JTR’s gearbox and he crossed the line only 1.6 seconds behind to secure his 20th podium finish of a spectacularly consistent season.

“The whole race Jayde, Ashley [Sutton] and I were doing the same lap times and nobody was able to pull away by much,” said Harrison. “I was suffering from fuel surge for the last four laps. Every time I exited the Complex, Ash would close right up behind me. It was a bit nerve-wracking and I was wondering whether I could hold on to second to the end. But the pace was there, and it was the first time in a while that I have been able to say that.”

In the traditional reverse-grid for race two early on Sunday morning, the title protagonists made contact on the opening lap causing Harrison to spin to the back of the field. In front of a bumper Silverstone BTCC crowd, which tipped 32,000 fans, Harrison was clearly disappointed with his ultimate P8 result, but the clerk of the course deemed the coming together with Kruger a “racing incident”, so no action was taken.

The final Formula Ford race of the weekend provided all the nail biting drama necessary to ensure that the Championship title will go down to the wire and be decided at the season finale in Brands Hatch next month. Kruger, who had achieved double pole, led round 27 all the way to chequered flag, with Harrison snatching P2 from Sutton at Copse on lap two. Thereafter Harrison maintained the gap between himself and the leader at less than a second up to mid race distance. They were separated by 1.6 seconds at the chequered flag, with Harrison also setting the fastest lap of the race – a 55.898 seconds/ 105.65mph.

Harrison and Kruger are now level on 651 points after 27 races and with just three remaining in the 2014 Formula Ford Championship of Great Britain.

Harrison Scott, #6 Falcon Motorsport:
“I would like to thank Nick and the Falcon team for working so hard to get us to where we are now. The result of race two was a bit of a setback and unfortunately Jayde [Kruger] has clawed back a lot of points from me. Now we’re level on points there is everything to play for at Brands Hatch; it’s like starting the championship all over again and means we go into the final round with everything to play for.”