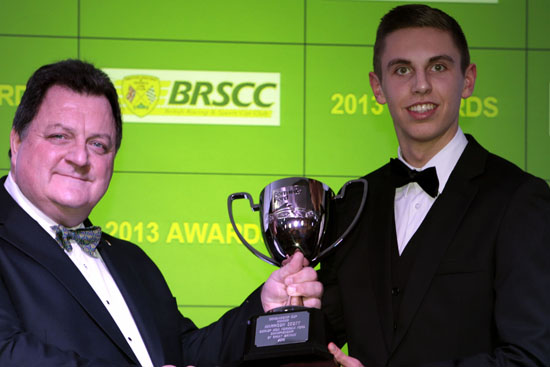 17 year-old Harrison, from Althorne, Essex, already has an impressive set of racing results under his belt. The 2007 Super One British
Karting Champion, and

World & European number three, maintained a succession of achievements right up until his final year of karting competition in 2012 when he won the Senior Rotax European Winter Cup and t

Scouted from trackside, the BRDC Rising Stars (24 years and under) are described as “the future of the Club, today”. From all four-wheel racing disciplines, the Rising Stars represent the BRDC in national championships wearing the schemes unique ‘blue roundel’ – being in effect “junior members” of the Club.Harrison entered his inaugural single-seater season in 2013 with Falcon Motorsport and became the Dunlop MSA Formula Ford Scholarship Champion and Vice Champion in the main Championship – all while attending his full time school education. He recently attended the BRSCC Awards dinner in Stratford-Upon-Avon to collect his two Championship trophies along with the ‘Joe Tandy Memorial Trophy’ for Best Rookie Driver (photo above).

Harrison comments, “This was a great honour, to be selected as a BRDC Rising Star member. I feel very privileged and proud to be part of such an exclusive club which has seen so many great drivers over the years. I will be trying my very best in 2014 to bring home a championship title and I would like to thank the BRDC judges very much for choosing me.”

Ian Titchmarsh, BRDC Rising Stars Panellist, adds “The British Racing Drivers’ Club is delighted to be able to invite Harrison Scott to become one of its Rising Stars at the first available opportunity. After an outstanding career in karting, 2013 was Harrison’s first season racing cars and he showed himself to be one of the fastest drivers in the Dunlop MSA Formula Ford Championship of Great Britain in which he finished second to the much more experienced Dan Cammish. I saw all Harrison’s races last year and have no doubt that, with the right backing, he could go a long way in the sport. With last season’s experience under his belt, Harrison should be a serious contender for this year’s title.”

Harrison shall contend the 2014 Dunlop MSA Formula Ford Championship once again with the Falcon Motorsport team which is based in Farringdon, England.

The first round of the 2014 the Dunlop MSA Formula Ford Championship (which once again supports TOCA, Britain’s premier motorsport package) takes place on 29/30 March at Brands Hatch, Kent. As part of a three-year deal, Formula Ford EcoBoost 200 has become the sole regular single-seater support championship for the BTCC’s programme, with three races at each of the 10 TOCA-organised events, with the benefit of live TV coverage.