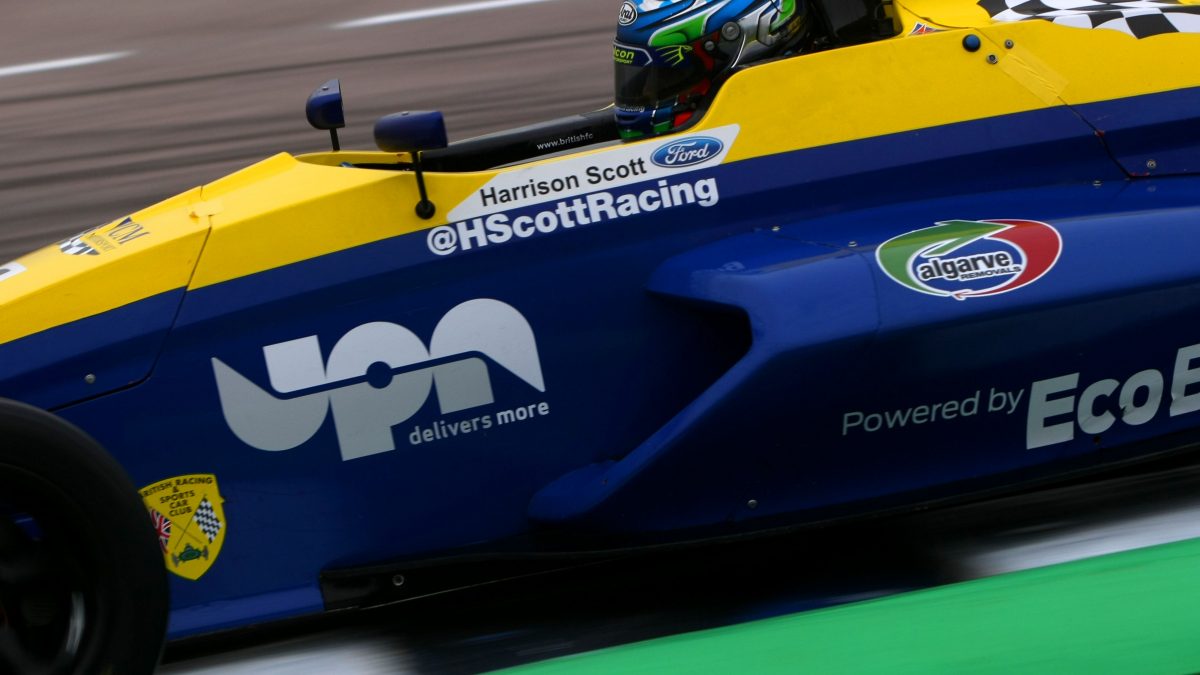 8 September, 2014 – Falcon Motorsport driver Harrison Scott left Rockingham Speedway on Sunday evening as leader of the 2014 Dunlop MSA Formula Ford Championship of Great Britain with a 17-point advantage and six races of the series to go.

During the event’s usual Friday testing sessions 18 year old Harrison lost half of the scheduled afternoon track time when his Falcon Motorsport EcoBoost Mygale was afflicted by a split water pipe. When he was able to return to the track to continue running Harrison recovered towards the end of the day to go third quickest overall.

It was a foggy start for qualifying early on Saturday morning at the Northamptonshire speedway. Essex-born Harrison was disappointed with a fourth-best overall time, not being able to muster enough pace to challenge pole sitter and title rival Jayde Kruger (JTR), to start in P4 and P3 for Rounds 22 and 23 of the weekend.

Harrison made a solid start to Round 22 in the afternoon and held fourth behind team mate Ricky Collard for the opening three laps. Despite being able to slot in front of Collard at the Deene hairpin, a race victory for Kruger brought him and Harrison level on points with just eight races remaining.

Sunday morning brought the reverse-grid event with Harrison lined up on the second row for the start of Round 23. By the end of the sixth lap the race was under the control of the safety car which was deployed whilst the MBM of Michael O’Brien was retrieved from a gravel trap. Harrison maintained position at the race re-start to claim his fourth consecutive third-place finish at the chequered flag.

It was to be a hat-trick of consistent Rockingham third-place finishes for Harrison at the end of Round 24 on Sunday afternoon, albeit seven seconds behind the winner. He started from P2 on the grid behind Kruger (with Sutton failing to participate in the weekend finale), but lost out to Marshall from the start line. The weekend finale became somewhat of a processional affair, with no changes in position until the end of the 16 laps/ 31.04 miles race.

Harrison’s high points scoring over the Rockingham weekend ensures that he heads to Silverstone at the end of the month as Championship leader, by 17 points. 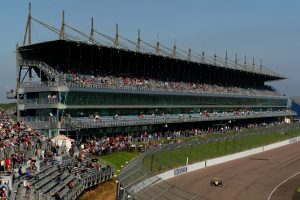 Harrison Scott, #6 Falcon Motorsport:
“I am happy that we had a consistent weekend, being up on the podium three times is always good in such a close championship, but it was a bit of a struggle as our outright pace still wasn’t there. It’s good to take away another set of points and obviously to be leading the championship, but we still have a lot of work to do.”