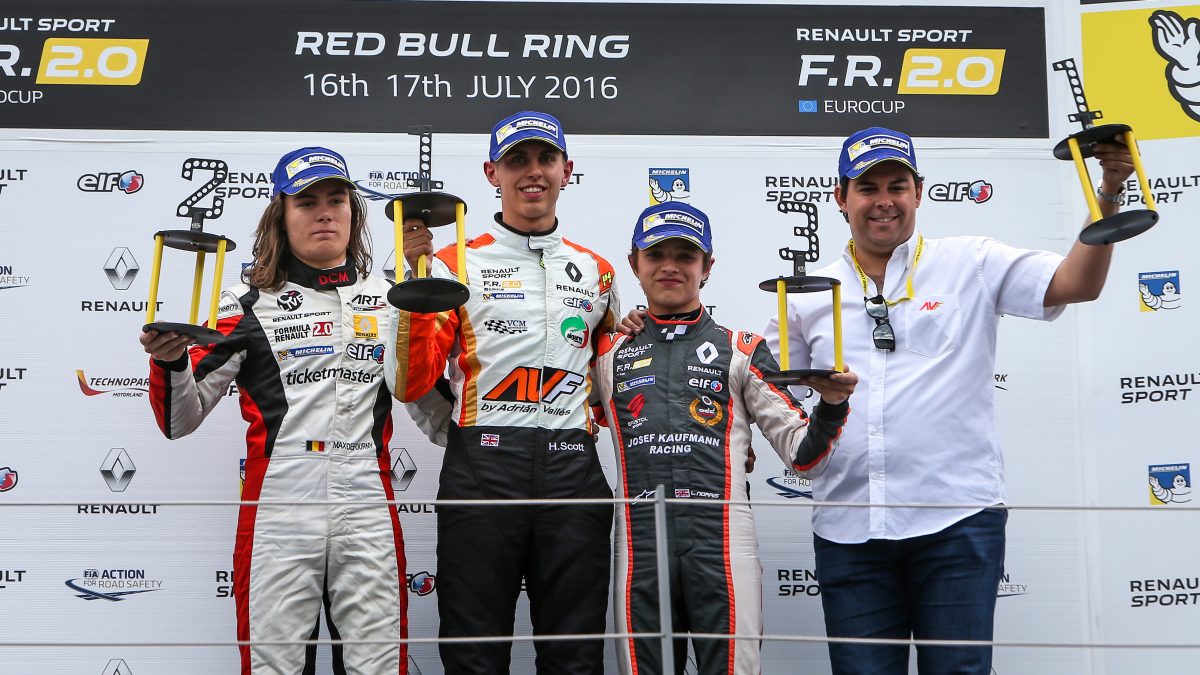 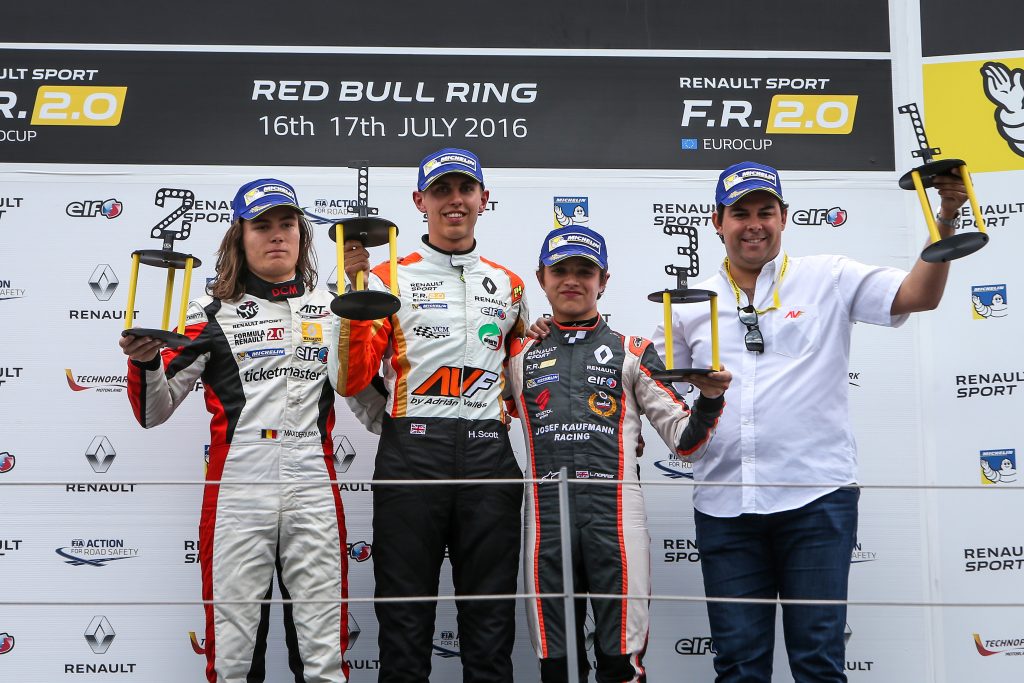 It was a stunning weekend in the Austrian alps for Harrison Scott and AV Formula by Adrián Vallés as they achieved their first pole position and a second win in the Eurocup Formula Renault 2.0 championship event at the Red Bull Ring. Harrison is now third in the 2016 Championship title hunt, with the AVF Spanish squad sitting in fourth place in the Teams’ competition.

20-year-old Harrison, from Althorne in Essex, maintained momentum from his winning outing in Monza to set the third fastest times during both practice sessions for round four of the 15-race Eurocup FR 2.0 series.

Qualifying could not have been tighter at the front of the 19-car strong field on Saturday morning. Less than three tenths of a second separated the fastest four, with Harrison sitting in P3 until the last flying laps. A mere 1,000th of a second split him and Max Defourny (R-ace GP) at the chequered flag, pushing Harrison to fourth on the grid for the start of race one.

From lights out the top four rivals provided one of the most exciting Eurocup spectacles of the season to date. From the second row of the grid Harrison maintained position and was locked in battle with Jehan Daruvala (Josef Kaufmann Racing) for most of the race, defending his position with calculated maturity to finish just outside the top three.

The Eurocup spotlight shone on Harrison and his AV Formula team as they dominated proceedings from qualifying to race performance in Spielberg on Sunday. The entire field took to the famous 4.326 km (2.688 miles) track as soon as it turned green at 08:35 and the jam-packed qualifying session saw pole position swap between competitors several times throughout. Lap times tumbled further after midway pit stops for new Michelin tyres, with Harrison ultimately making the most out of the new sets of new rubber to clock a new circuit record of 1:28.172sec to seal his first ever pole position with his AVF team, almost three tenths faster than Defourny in P2. 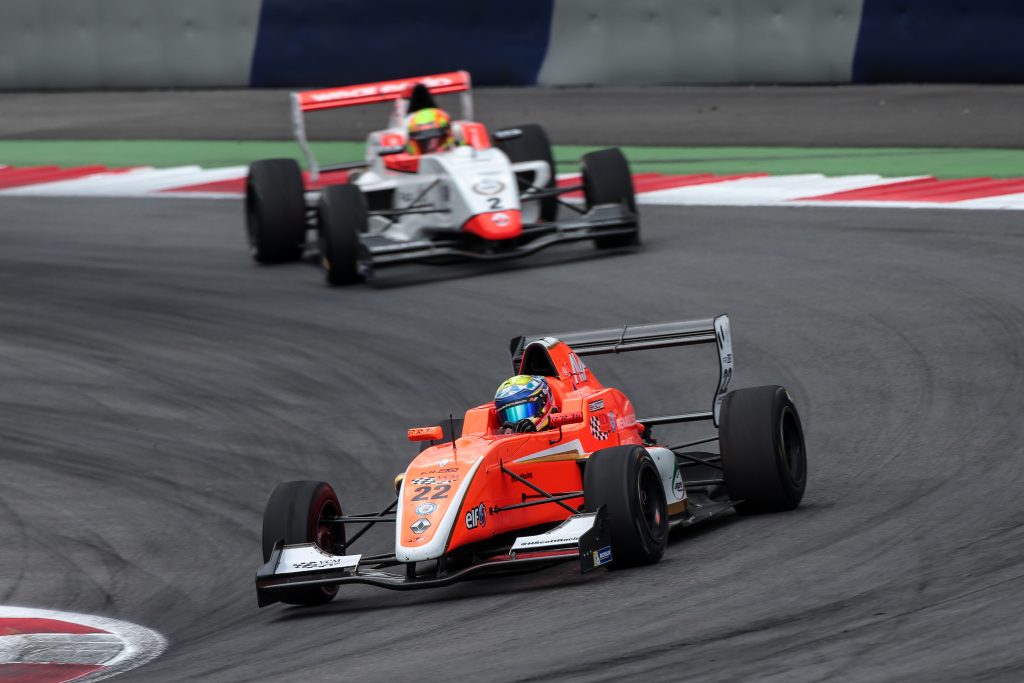 It was a lights to flag win for Harrison who controlled the 18-lap second race for its duration. With the current Championship leader unable to match the pace of #22 AV Formula Renault from the word go, Harrison pulled away and drove a faultless race. Despite pressure in the last stint from Defourny, the Essex-born racing ace kept his head to secure his second victory of the season.

Harrison is now third in the 2016 Eurocup Formula Renault 2.0 championship standings with 121 points.  His AV Formula by Adrián Vallés team is fourth in the Teams’ competition as the series takes a break for the summer before heading to Paul Ricard, France on 27th – 29th August 2016.

Harrison Scott, #22 AVF by Adrián Vallés team:
“Right from the get go we had great pace and confidence in the car. I adapted to the track really well, but unfortunately damage to the tub in last practice meant that the guys had to work really hard to get the car ready for qualifying. Because of that we didn’t quite find the optimum in qualy, but were still happy with P4. I made a good start to race one, lost position on the second corner, but made my way back to keep position in the end. On Sunday I knew that if I could hold it altogether we’d be in a good position. To get pole by over two tenths, and the first for the team with the lap record, was really fantastic. I got off the line well at the start of the second race and kept the lead going. I just kept my head down and concentrated on making it count to the finish. I would like to thank Adrian, the team, VCM and my family for their support and look forward to coming back to Paul Ricard after the summer break.”
END
Provisional 2016 Eurocup Formula Renault 2.0 Championship Classification after Round Four
*Half championship points awarded in Monaco as per article 9.3 of the sporting regulations
1. Lando Norris (Josef Kaufmann Racing), 159 points
2. Max Defourny (R-ace GP), 132.5
3. Harrison Scott (AVF by Adrián Vallés), 121
4. Dorian Boccolacci (Tech 1 Racing), 108
5. Jehan Daruvala (Josef Kaufmann Racing), 47