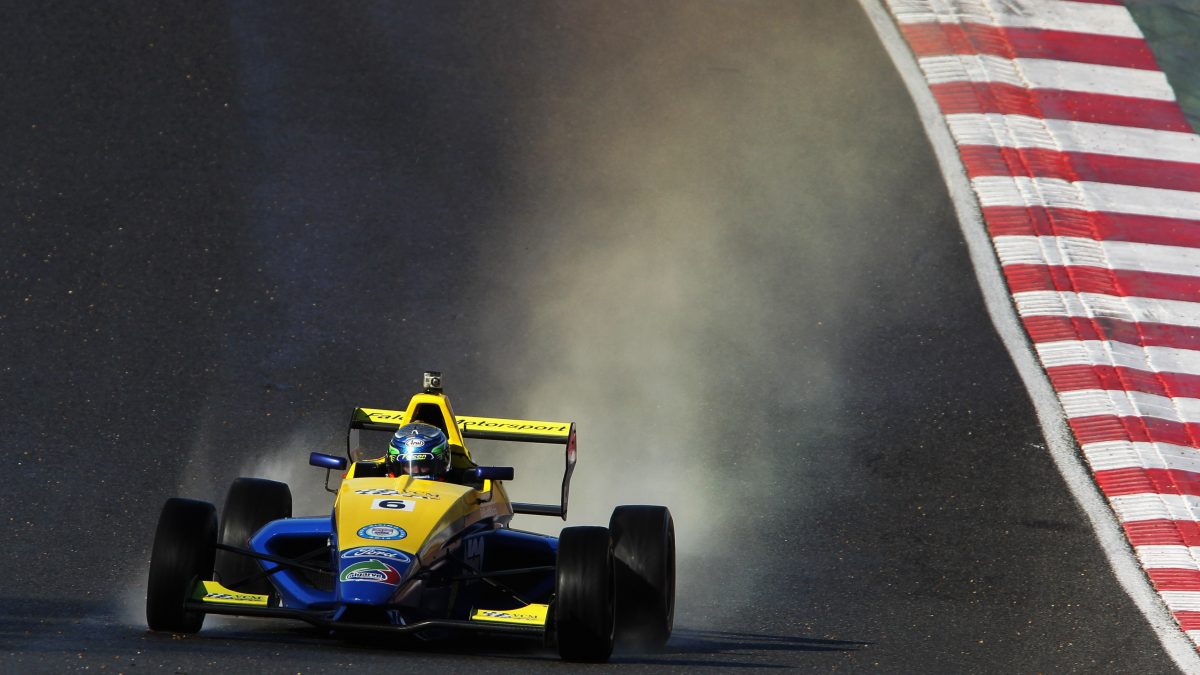 13 October, 2014: Harrison Scott’s second season contesting the Dunlop MSA British Formula Ford of Great Britain championship came to a sensational close at Brands Hatch. The 2013 Scholarship class champion who drives for Falcon Motorsport won two of the three races over the two-day event, to bring his season tally to 23 trophies and to secure at least second place in the 2014 Drivers’ Championship.

Harrison was on the pace from the word go at the renown undulating track in Kent. Coming in to the weekend on level points with Jayde Kruger (JTR), Harrison scored two P2 grid positions for races one and three during an impressive qualifying performance in extremely wet weather early on Saturday morning.

Round 28 (race one) in the afternoon was interrupted by several incidents and a safety car period as the slippery track conditions continued. Harrison took his fourth win of the season with relative ease after pole sitter Ashley Sutton left the black stuff on Paddock Hill Bend. Harrison took the chequered flag 1.3 seconds ahead of team-mate Ricky Collard to end the day eight points ahead of his Championship title rival Kruger.

Sunday morning saw further inclement weather and, despite patches of sunshine breaking through, rain clouds hung ominously. For the last time in the reverse-grid formatted race two, Harrison was in P4 for the start of Round 29. The crucial moment of the weekend for the 18 year old from Essex came when Kruger ran wide out of Clearways from pole position allowing Harrison, who had made a brilliant start to shoot up to second, to draw level down the main straight. He then tried to pass Kruger into Paddock Hill Bend and made a successful manoeuvre at Druids, pulling away a clear car length out in front. Kruger then appeared to turn in to Harrison’s left rear, breaking his suspension and ending his race.

The five-hour long gap between races on Sunday proved to be an excruciating time for the Harrison and his Falcon Motorsport team. Team owner Nick Streatfield lodged a protest immediately after the race against Kruger’s on track actions which had resulted in Harrison’s retirement. Having viewed footage of the incident and heard evidence from both drivers, the championship’s Clerk of the Course opted to penalise Kruger for causing an avoidable incident. However, his JTR team appealed that decision and the independent Stewards rescinded the penalty. Falcon Motorsport reacted immediately and is appealing the decision by the Stewards to overturn the original decision by the Clerk.

Heading in to the final round of the 30-race long season Harrison had the bit between his teeth and was determined to end the season with another visit to the top-step of the podium. If the team were to be unsuccessful in its appeal and he was to clinch the Championship, Harrison would have to win Round 30 with Kruger finishing in eleventh place or lower. From the front row of the starting grid Harrison made a charge through Dingle Dell after pole sitter Sutton ran wide. He took the lead and drove a commanding race to produce an overwhelming victory, once again showing his ever improving race craft in the damp and slippery track conditions. Unfortunately, Kruger finished in eighth place and ultimately six points ahead of Harrison in the Championship title bid. 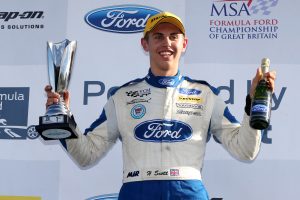 Whilst the Falcon Motorsport team awaits the appeal decision from the MSA, Harrison is now focussing on preparations for the weeks ahead. As one of the six young-driver finalists in the prestigious McLaren Autosport BRDC Award he will be assessed in Formula 2, DTM Mercedes and McLaren GT3 vehicles on the Silverstone Grand Prix circuit. The judging panel includes ex-Formula 1 racer and BRDC president Derek Warwick, British Touring Car Championship star Jason Plato, team boss and former GT racer Andrew Kirkaldy, McLaren head of vehicle engineering Mark Williams, circuit commentator Ian Titchmarsh and Motorsport News editor Kevin Turner. The winner, whose identity will be revealed at the Autosport Awards in December, will receive £100,000 and a McLaren F1 test drive.

Harrison Scott, #6 Falcon Motorsport:
“I was really happy to get the final race win and go out on a high. I obviously would’ve liked to have been celebrating even more, but I am very happy for the team that we achieved two more wins at Brands. Everyone in the Falcon Motorsport team has worked incredibly hard this season; it has not been an easy ride, we have had our ups and downs.
“I would like to thank Nick [Streatfield] for another incredible season with the team, Ford for organising such a great Championship, Dunlop, the MSA, my sponsors UPN and VCM Motorsport and the BRDC Rising Stars for all their support. I am now looking forward to the McLaren Autosport BRDC Award tests coming up. To be one of the finalists is a great honour and I shall take full advantage of the amazing opportunity.”

*The final championship results remain provisional pending an appeal to British motor sport’s governing body, the MSA, by the Falcon Motorsport team following the incident in Round 29 involving Kruger and Harrison which led to Harrison’s retirement. The team is appealing the decision by the Stewards to overturn the decision made by the Clerk of the Course to exclude Kruger from round 29 and to reinstate the penalty.*