1st and 2nd in the Finals at Wackersdorf

1st and 2nd in the Finals at Wackersdorf

Strawberry Racing star Harrison Scott once again showed why he is No 3 in the world after a successful weekend at round 2 of the European Rotax challenge in Wackersdorf, Germany.

This was a track that Harrison had not seen prior to this race so to qualify 6th out of 78 competitors was a great start to the racing programme ahead. 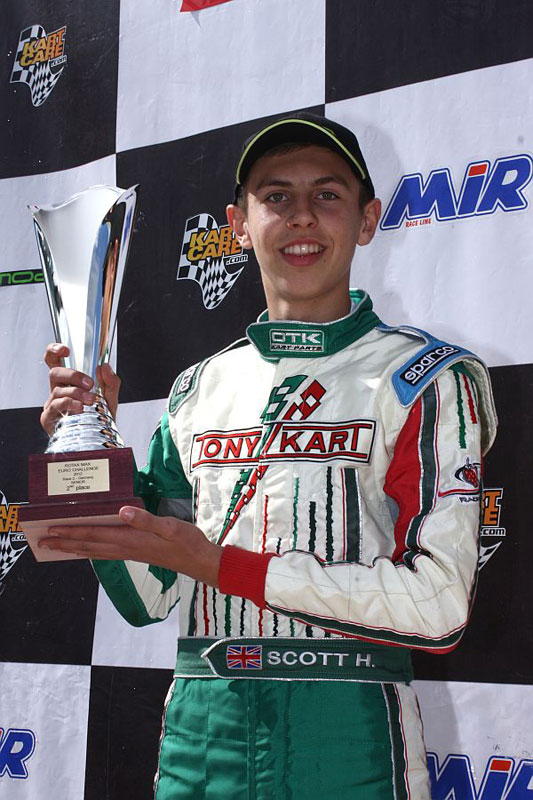 Harrison’s Tony Kart Racer EVRR chassis and Cream Racing Engine was on top form and finished 1st in the first heat, the second heat proved more difficult, with a sudden down poor of rain half way through the race Harrison made a rare mistake despite having more than a 2 second lead crashing at the very wet hairpin which left him somewhat embarrassed, but after apologising to team manager Warwick Ringham he won the next 2 heats.

With the 3 wins and 1 mistake Harrison started the pre-final from grid 8 not the best position but with a point to prove he made a fantastic start and by the end of lap 1 he was in 3rd place. On the following lap Harrison took the lead and stayed there for the remaining 12 laps taking the chequered flag and making amends to the early mistake.

Starting the final from pole position Harrison was more than confident he could achieve another great result. He led 14 of the 18 laps but the new Mojo tyres were just not as good and soon began to deteriorate very quickly with the rear of the kart sliding worst at every corner. Harrison lost the lead but still finished second just 0.8 of a second behind. This was the 6th podium from 6 races in Europe in the 2012 season and leaves Harrison 2nd in the European Championship just 2 points behind the leader with 4 races remaining.

“Once again a massive thank you to Strawberry Racing, Paul spencer, Warwick Ringham, my race engineer Tom Stackhouse who did the job once again making my Tony Kart Racer EVRR perfect, also Tim for keeping my Cream engine fast all weekend”.